Local and regional sea level rise depends not only on how much water is contained in the ocean, but also on the rise and fall of the land, including underneath the ocean.

As the global climate continues to change, average global sea levels are expected to continue to rise. Regional and local sea level changes will have the largest impact on coastal communities. Changes in the elevation of both the sea surface and the sea >loor affect local sea level. Tectonics (e.g., earthquakes, mountain building), ground water withdrawal, soil compaction, the ongoing response of the Earth to past glacial ice sheets, and the redistribution of water and ice around the globe can cause the ocean >loor to move up or down: this is known as "vertical land motion". While the size of these effects vary depending on location, the combination can contribute to very dramatic sea level changes.

Tectonic activity, the most well known process that contributes to vertical land motion, can produce uplift or sinking (subsidence) of the earth either suddenly during abrupt events, such as earthquakes, or gradually over thousands to millions of years due to long-term plate motion.

A second source of vertical land motion results from soil compaction. Many coastal communities are constructed on granular sediments or land>ill. Over time these regions slowly subside as the ground beneath compacts. This process can be accelerated by groundwater withdrawal and the extraction of oil and gas. Vertical land motion due to sediment compaction can produce rates of local sea level rise that are 2-3 times larger than the current rate (~3 mm/yr) of global mean sea level rise.

A third source of vertical land motion is the past and present melting of ice sheets and glaciers. Ice sheets and glaciers depress the Earth beneath them and cause the ground at the edges of the ice to uplift, forming bulges. When the ice melts, the ground beneath the ice sheet rebounds (uplifts) and the bulges subside. These effects occur over both short (instantaneous) and long (100s to 1000s of years) time scales. Vertical land motion is occurring today as the Earth continues to adjust to the past melting (10,000 to 20,000 years ago) of the large ice sheets that covered parts of North America and Europe during the last ice age (Figure 1). Present day melting of ice sheets and mountain glaciers (e.g., the Greenland Ice Sheet, the West Antarctic Ice Sheet, Alaskan glaciers, etc.) is also producing this type of local vertical land motion.

Therefore, understanding the varied forms of vertical land motion, and where they are occurring today, is both critical for, and makes more dif>icult, the prediction of local and regional changes in sea level.

Where The Science Is Headed

Development and implementation of a precise, civilian- accessible Global Positioning System (GPS) has greatly increased the ability to measure vertical land motion due to the combination of all the above effects. Dense networks of GPS stations have been recording vertical land motion in many regions since ~2000. 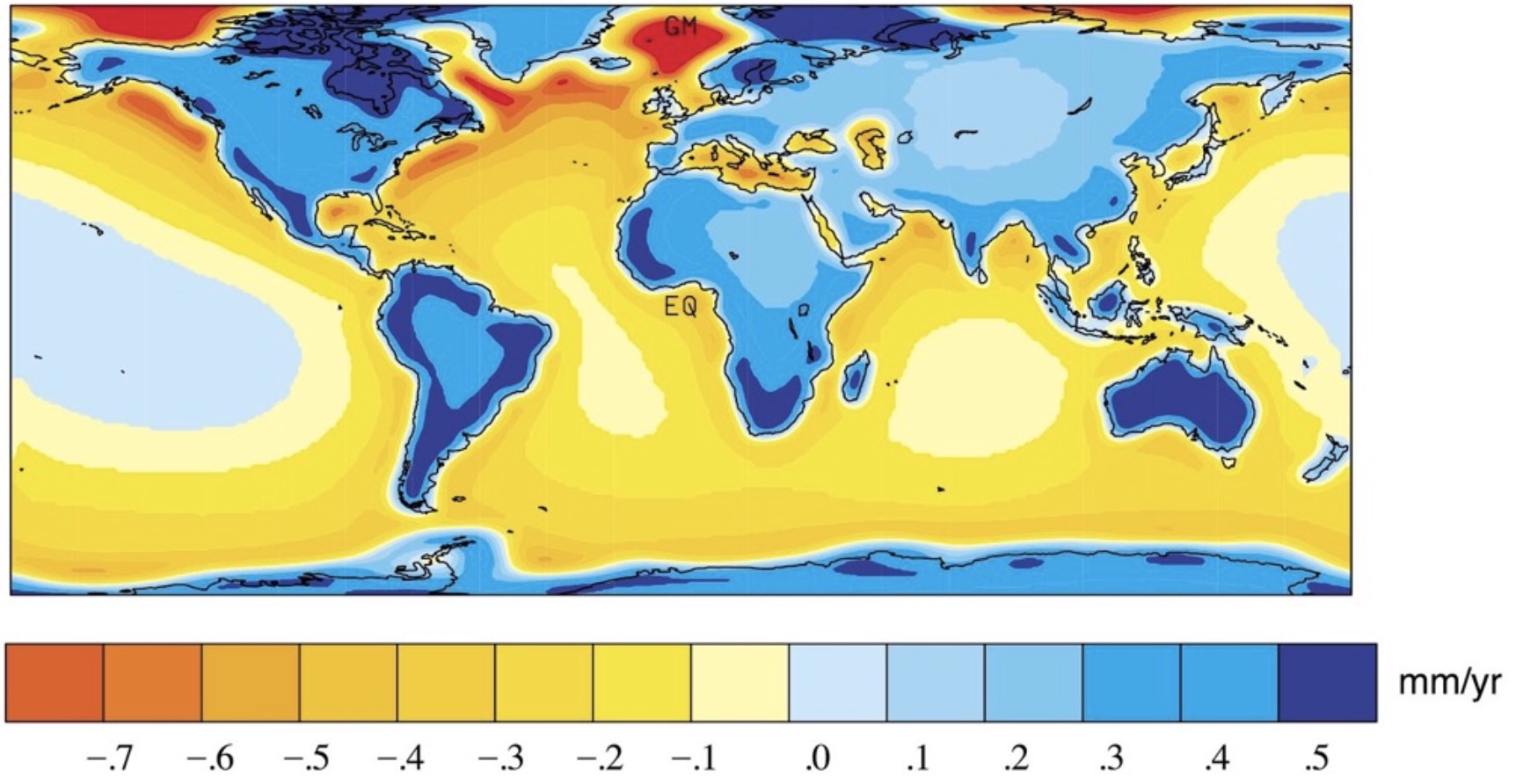 Figure 1. Prediction of present day vertical land motion due to the ongoing response of the Earth to past melting of the large ice sheets that were present during the last glacial maximum (Milne and Mitrovica, 2002). In the absence of other forms of land motion, areas in blue are experiencing uplift, while regions in yellow and red are subsiding.

While the network of GPS stations continues to expand, there are still globally only ~300 GPS receiver stations at the same location as tide gauges. At tide gauge sites without GPS observations, it can be dif>icult to distinguish between sea level changes due to vertical land motion and those due to changes in the sea surface height caused by ocean heating and meltwater. Increasing the number of GPS stations at tide gauge locations will be important for improved monitoring of local sea level changes.